I'm off to the reunion! We're going to have a blast. Tyler will join on Friday evening, so I'm going to miss him. We'll try to save some fun for him. :) This week has been great, as lots of the fam has arrived. I really feel so lucky to have married into such a fun and wonderful family- I could not have hand-picked a better family to join! Tyler's internship started Monday, and despite still dealing with a little leftover flu-ish stuff, he's doing well and liking it.

I went rock climbing yesterday with my mom. Yeah, picture that. Have you ever been rock climbing with your mom? We had so much fun. Tim and Kenny were there with us after a little bit, and I decided it was more fun without strong boys showing off how high they could get- I enjoyed laughing and falling with my mom much more.

Anyway, I just think family is the greatest. I have THE 2 best ones, despite what you may think about yours. No rock. 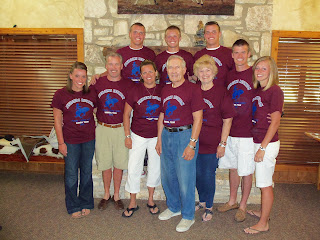 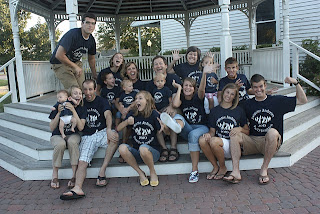 p.s. not sure why the only picture I have from the last Andersen reunion with everyone in it is a silly picture... but I guess that represents us best anyway.
Posted by Cam at 10:33 AM 1 comment:

We are just having toooo much fun here! It makes me so excited to think that a year from now, we'll be moving here for good. Crazy. It's been a party for quite a few days now, as lots of Tyler's extended family has been trickling in for the reunion, which officially starts Wednesday! We stay up late playing games and talking and laughing our bums off and eating lots and lots of food. And taking pics like this... why do boys turn everything into a competition?? 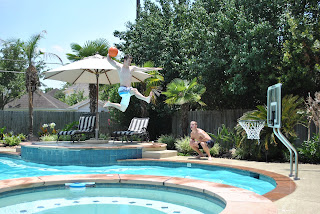 I have to say... hubby is pretty darn impressive. Check out that air! He did make the dunk, by the way :) 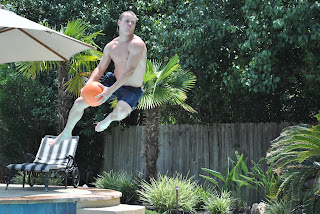 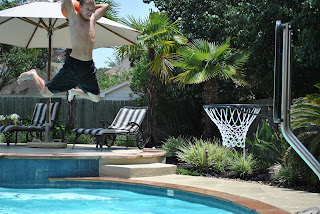 This picture's awesome too. They were dunking for hours! Tyler was f.r.i.e.d. The girls were content to give scores and catch some rays. 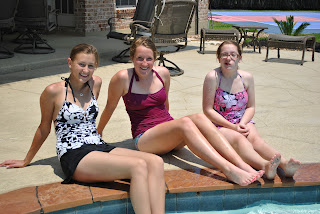 Gabby and Natty are to my right, keeping me company while the boys were maniacs! Those legs need some serious sun. Guess I'm in the right place!

Tyler woke up feeling sick yesterday, and spent the whole day feeling nauseous and gross and throwing up. I thought maybe it was something he ate, but when he spiked a fever of 102 that afternoon, I knew it couldn't have just been that. Thank goodness for sweet brothers who hold and honor the Priesthood who were able to give Tyler a blessing. He is feeling much better today and even ventured off to work for orientation. What a trooper. I'm so glad he had a week off to relax a bit before his internship started! He works so hard and I'm so proud of him. Plus, Tyler looks really really handsome in his work clothes... he makes business casual look good!
Posted by Cam at 8:13 AM 1 comment:

You just go ahead and figure out that title! We are finally in Houston! Not that it has taken us this long, we're just still happy about it. :) Even though we said we would take it slow getting here, once we got in the car we just wanted to get out! So when we left Moab on Saturday night, we made it to Farmington, NM and spent the night there, and then drove the rest of the way on Sunday. Yes, the REST of the way. 18 hours I believe. It was ridiculous. But it was so worth it to get here! We spent time with both our families on Memorial Day, and we were glad to be here for that. Anyway, here are some pics from our Moab adventures! 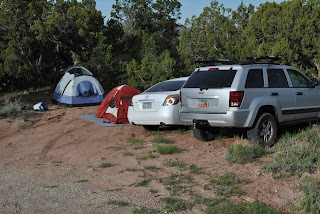 Above is our campsite. We got to Moab around 8 pm on Friday, but since it was Memorial Day weekend, Moab was absolutely packed with people. It was insane. Not one open space at any of the nearby campsites! We drove around forever trying to find something. After a brainstorming dinner at Wendy's, we decided to try going further out of town than Arches or Canyonlands. We went south of Moab to the national park that's pretty close to Ken's Lake and found a spot there a bit after 11. Yes, we were campsite hunting for over 3 hours! It was crazy. *Note: Ken's Lake was hilarious. It was dark when we were searching for a campsite so we didn't see it until the next morning... pretty sure Ken just decided he wanted something named after him so he dug a lame hole and filled it with water. It's so man-made and funny-looking. Poor Ken.* 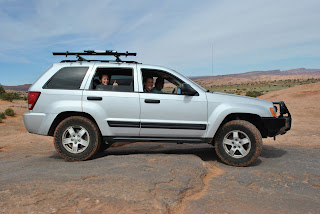 About to begin our jeeping adventures on Fins 'n' Things. 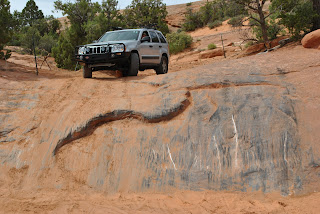 Yeah, we drove down that. And made a white mark similar to the ones already there! Thank goodness for the hitch or that mark would have been made by the bumper. 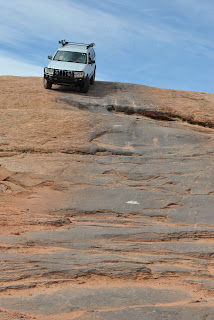 Austin was a really good and cautious driver (possibly because that's their daily commuter and not a vehicle specifically for those trails)! 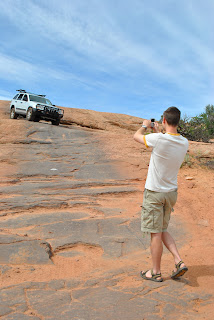 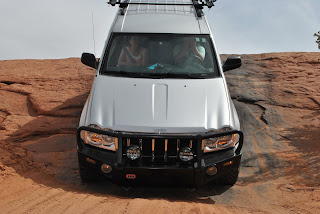 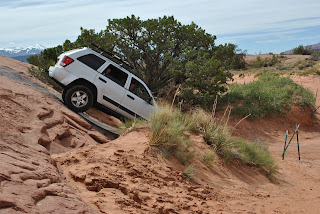 Check out the angle... stuff was flying from the back to the front of the car! It felt so funny. 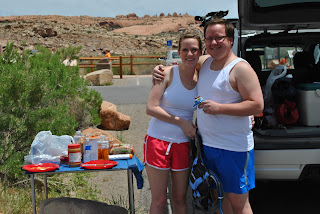 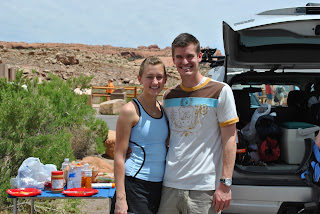 Proud of our lunch-making skills! :) 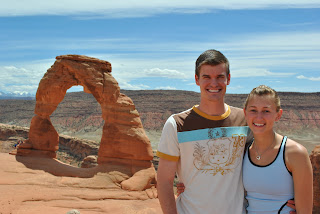 That hike was a lot more difficult than I remembered... maybe it was in part because we went in the hottest hours of the day?!? 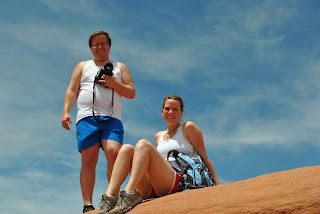 It was so fun to be there with Austin and Giselle! We had a great time. After we hiked, we drove back to our campsite. We decided it was much too hot to build a fire, and we were all exhausted, so we just kind of packed up and left! Our plan was to stay until Sunday, but I was glad we left when we did. The wind really picked up on our way out and I was glad not to be sleeping in a tent that night.

So that was our Moab trip! We had a blast. We've had a great week in Houston, but more about that later. I feel pretty accomplished just catching up this much!
Posted by Cam at 12:11 PM 1 comment: 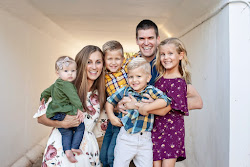